My Connection to Mortal Engines

I produced the original copies of Mortal Engines when I worked as a Production Controller at Scholastic and can still picture the moment when I turned the first page. I’d been expecting something fairly lacklustre. What I found instead was a story that carried me into a world of traction cities, aviation and long-buried mysteries. From that moment, I was hooked on YA (although I’d class Mortal Engines as upper middle grade now).  I wanted to read it, write it, live in it.  These were the early heady days of the Young Adult fiction explosion.  J.K. Rowling and Philip Pullman were going viral, and I fully expected Philip Reeve to join that crowd.  But for some reason he didn’t.

Even though I left publishing a few years afterwards (having organised the printing for 3 more novels in the Mortal Engines Quartet), my Reeve fandom continued. I collected the prequels and his Railhead Series has been one of my favourite children’s series of recent years.

His imagination sparkles, his plots are intelligent, but still he’s flown under the radar. So when I heard that Peter Jackson was going to produce a film adaptation of Mortal Engines, I was pretty excited and also slightly concerned.  You see although I love the Lord of the Rings trilogy, I’ve not been too impressed with Jackson’s more recent films.  Too much whimsy, too much CGI. Also, I knew that the characters had been aged up for the movie.  But this wasn’t enough to put us off booking to see the Mortal Engines film as soon as it came out.

So how did it compare?

Well it wasn’t bad.  Parts of it were amazing, parts were boring. Did it live up to the book? Sadly not.

A mysterious young woman, Hester Shaw, emerges as the only one who can stop a giant, predator city on wheels devouring everything in its path. Feral, and fiercely driven by the memory of her mother, Hester joins forces with Tom Natsworthy, an outcast from London, along with Anna Fang, a dangerous outlaw with a bounty on her head.

I don’t know how many of you have read the story so I don’t want to share too many spoilers in this review, but some of the main (and much darker) elements that elevated the original were left out of the movie. Because of this, they’ve turned what could have been an edgy, emotional ride into standard Hollywood fare.  All good and well if you like saccharine escapism, but if you’re a fan, it’s not a viewing experience that you’ll probably want to repeat. However it was worth seeing if only for the recreation of Reeve’s world.  For the purposes of this Mortal Engines film review, rather than blather on for hours, I’ve decided to summarise the pros and cons from my perspective:

What I Didn’t Enjoy

Totting it all up, the positives of the Mortal Engines film just won out over the negatives.  As a cinematic experience is was fine.  It had all the required ingredients – action, fantasy, romance – but in comparison with the original, it was a marshmallow replica.  In many ways, it reminded me of The Golden Compass remake – a story that sacrificed it’s true heart at the altar of Hollywood.  I wouldn’t say don’t go and see the film because that would mean missing out on Reeve’s grand vision, but be aware that it has a far more interesting and darker twin.

Will there be a Mortal Engines 2 film?

It looks unlikely that there will be a sequel to the Mortal Engines film in the near future. The production budget was at least $100 million and the total worldwide gross totalled at $83.7 million, making a loss of $16.3 million.

The Mortal Engines film review ratings were also incredibly low. Rotten Tomatoes gave the movie a score of 26% (184 reviews) which I don’t personally agree with!

My thoughts are that we’re not done with the Mortal Engines series quite yet though. This is too original a concept to leave alone. Either we’ll see a remake a few years down the line – or Peter Jackson will give it one last try. Let’s just hope they stick to the original storyline next time.

Book Review: The City We Became by N.K. Jemisin 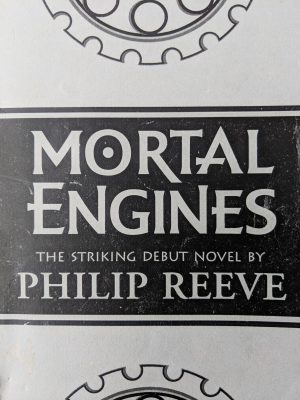