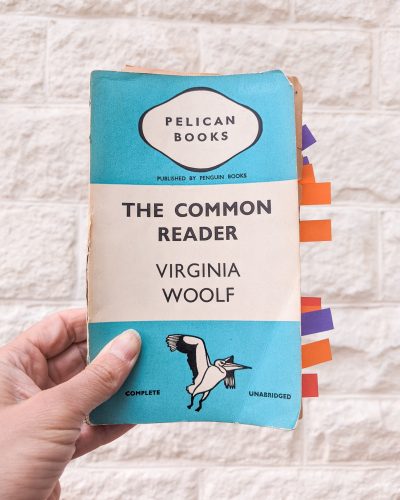 The Common Reader Volume 1 holds a curious mixture of relevance and obscurity. Containing a collection of 21 essays written by Virginia Woolf, this slim volume offers a critique of literature – both classic and ‘contemporary’. I write contemporary in quotation marks because this presents one of the most problematic and interesting parts of Woolf’s work. Many of the writers that Woolf mentions are read only at degree level today.  Even as an English Literature graduate, I find it a stretch to remember Kyd, Greene and Galsworthy – let alone Montaigne and Evelyn. The common reader in this book is not the one we know today, but one from a century ago. Woolf herself frequently considers which works will survive the ages -particularly in How it Strikes a Contemporary.

“If we make a century our test, and ask how much of our work produced in these days in England will be in existence then, we shall have to answer not merely that we cannot agree upon the same book, but that we are more than doubtful whether there is such a book.”

I think Woolf would have been very pleased to find that she’s one of the survivors together with Jane Austen, Emily Bronte and George Eliot – the women writers that she focuses on in The Common Reader. In the essay, Jane Austen, Woolf dissects the author’s life and novels with gentle precision – imagining future books which were never written.

This is one of my favourite pieces of writing in The Common Reader Volume 1. I suspect this because I have read (and seen) more of her work over the years, but also because we visited her home in Chawton last year. Woolf is balanced in her criticism – praising Austen’s observational skills, noting her parochial vision, and wishing that she’d had the opportunity to evolve as a novelist. A complex perspective summed up in a few finely-crafted pages.

The essay entitled Modern Fiction also stands out for me because it is here that we see the evolution of Woolf’s own approach to writing. She moves away from the structured materialism of Arnold Bennett and H.G. Wells and towards the freeform style of James Joyce. I could almost hear her thinking aloud as she tried to make sense of her ideas.

“Life is not a series of gig lamps symmetrically arranged; life is a luminous halo, a semi-transparent envelope surrounding us all from the beginning of consciousness to the end. Is it not the task of the novelist to convey this varying, this unknown and uncircumscribed spirit, whatever aberration or complexity it may display, with as little mixture of the alient and external as possible?”

Also bear in mind that that this was written in 1919, before she produced her most significant novels. I love the way she reaches for the undefinable here then again and again in her fiction. Woolf believes “that there is no limit to the horizon” when it comes to art and this is both dizzying and reassuring.

So it is worth reading The Common Reader Volume 1?  For fans of classical literature, and of Virginia Woolf – yes. She covers a lot of ground including Elizabethan playwrights, Tsarist Russians and medieval families. Even the most bizarre essays such as The Lives of the Obscure offer a new angle on literature, history and life but many modern common readers (including myself) may also find a percentage of this collection overly archaic. It’s one to dip into rather than race through. Contrary, and at times baffling, but always original.